I love big beginnings. Maybe it’s the project manager/event organiser in me, but there’s nothing like sitting down with a blank canvas, drawing out a programme of work and determining The Approach. I’ve spoken before about past New Year resolutions, and I am a little late (as usual) in finalising this year’s list. But before I launch into this year’s idealism, let me go through a short (by my standards) review of last year’s effort.

I had split last year’s resolutions into 3 personal mottos (“Be my own mum”, “Live in the moment”, “Glass is half full”) and 5 everyday goals (“Monday Meditation”, “Attend writers’ meetings”, “Write, Write, Write”, Weekday Devo” and “Read 10 books”.) And this approach has worked surprisingly well over the year, given all the crazy interruptions.

I attended meetings at the Writing group I’m part of, until I was no longer physically able to because I was in a different continent. I also started reading books again, but didn’t get anywhere near 10 books. I think I’ve read 5 books halfway. So really, that was a 25% success rate – not impressive, but it got the juices going anyway. The writing goal was the hardest to achieve, not only because of the packing and unpacking I did all year, but also because all willpower dried up – and with it, inspiration. I didn’t even feel like blogging, partly because I was Tupperwaring most nights towards the end of the year, but mostly because I didn’t want to bore you or myself with my grief and negativity.

But the biggest surprise to me was the success of Monday Meditations and my weekday devotions. Didn’t do it the whole year through, but there were stretches of months when I did both consistently. And then I’d lapse into one or the other, before going into it again. Most of all, it was always there at the back of my head as something I want to do and need to do. And then when my mother died, all that desire to reconnect with God really came rushing in. Even if it’s so I could whisper, “Tell mum I said Hi. And that I miss our chats. Would you?”

On the personal motto front, I forgot about the “Be my own mum” one a lot – chiefly because it didn’t matter to me that much anyway. My role as Daughter came into the foreground a lot more last year, and any brush of Momsy competition with another got quickly squelched by the weight of my apathy. (“So you never let your children watch television because you’re not a lazy parent. And you’ve never let them eat cheese toasties because of the sodium levels in bread, ham, AND cheese. Well, good for you.”) Probably not the desired outcome in terms of attitude, but it did mean that I breathed my own version of motherhood a lot more freely.

“Glass half full” was snorted at a lot last year. And yet, I did count my blessings even in the darkest of moments. But I wasn’t feeling up to the pop psychology of Being Positive all year round, and so I ignored that one, really.

“Live in the moment” proved to be my favourite, and I whisper that to myself a lot. It’s a wonderful way to shut down the million voices jostling for my immediate attention. “Be present” is the shorter version, but means the same thing. There is vacuuming to be done before visitors arrive, dishes to be washed before dinner, and Tupperware deliveries to be checked and repackaged by tonight. But my daughter just pulled out a box of jigsaw puzzles, and this is supposed to be our day together. There is a reason I quit my job. Drop everything else. Do the jigsaw. Be present.

Part of the reason I took up Tupperware was to distract myself every evening. I had reached a point after dinner and when Tony went off to his study nook, where I’d sit in my soi disant work room and feel the dark creep in. I have to say I ran a lot on adrenaline last year. The practical aspects of being the sole executrix of someone’s will, of being the main instrument in deconstructing a person’s life were a fabulous crutch I could use to gallop along from one important thing to another. Tupperware was another way to extend the busyness. It isn’t rocket science, fairly menial, and pushed me to meet new people and take an interest in the world around me while allowing me flexibility to take care of house and home.

But I think I always knew that eventually, I’d have to address the sadness properly. Which was why I had bought myself The Happiness Project by Gretchen Rubin.

As a Christian, it seems almost counter-intuitive to buy a secular self-help book on finding happiness, when we tell ourselves that the bible should suffice. The bible does suffice. It says a lot about what joy is, and it does make a distinction between worldly happiness and Godly joy. I’m not about to discard the Good Book. (Actually, the Good BOOKS, since there are 66 of them.) But I am experiencing some technical difficulties.

It’s like the concept of self-control, where we are told to pray for it and desire it and wait for it to be given and exercise it. We are told what it looks like, and what it doesn’t look like. We are told the consequences of not having any. But I think it’s also useful to know how self-control happens, in the most base and practical of ways. Like how your body needs glucose to help your brain control impulses. And that insufficient sleep impairs your brain’s ability to absorb glucose. And that you could try waiting the recommended 10 minutes for the wave of temptation to dissipate. A 10-minute wait  – the practical form of spotting sin and then fleeing from the devil.

Likewise, I’m trying to work out how to develop gratitude and happiness through concrete actions. I’m not going to stop meditating, and I know that my joy comes from the Lord. But I also know that shaking oneself out of a funk often requires faking it till you’re making it. Happiness is a side product of love in action. I need an action list.

The Happiness Project has a chapter for each month, and all Gretchen does is talk about what she decided to do for herself. Her January was about research on energy generation – feeling pumped enough to even want to be happy. In practical terms, she resolved to

And that’s what my January resolutions have become. PERFECT approach for me, because I do have a short attention span most times, and a month is long enough to form a habit, but not too long that I get discouraged by the interminability of it.

I’m also continuing my mottos from last year, and they now are:

So yes – wish me all the very best. If you’re the praying kind, then pray that I’ll learn to be kind – for that is one of my biggest struggles. And for those of you who have resolved to do better by not doing worse, I salute your effort. I salute your will. I salute your desire to be a better person. 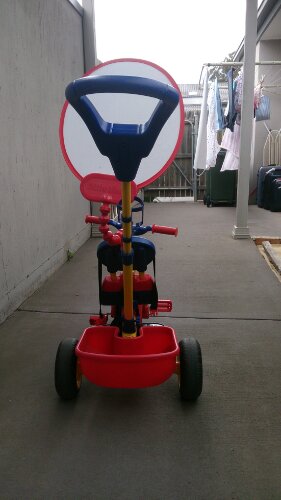 A beautiful, windy, cloudy late morning beckoned us to leave the house behind and take a cycle around the neighborhood. I also played postman with my old Tupperware catalogues, so I managed to tick something off my To-do list! Arddun was very impressed by 2 smooth rocks she managed to find. The simple things.