But the second time ’round, everyone started getting boys. And the more boys we got as our Number Twos, the more we marvelled over the math. Because that’s like flipping a coin n number of times, and getting Heads n times in a row. That’s pretty spesh.

Which is why I think I’ve been suspecting that New Blob (for want of a better name) is going to be a Girl Blob. Law of averages and all that. Because what is the likelihood that there would be 10 little boys in a row, right?

Yes, we are proud and shiny to announce that New Blob is a Boy Blob! Which means we now have what Australians charmingly refer to as a Pigeon Pair – one of each. I should have known better than to trust my gut on this one, because the last time I hazarded a guess for Arddun, I was wrong too.

Our ultrasound technician this time has over 30 years’ experience, and was adamant about his sex. (“Definitely a boy. Loooots of photos of his penis.”) Except of course, all we saw were shadows amidst constantly moving legs, and had to take her word for it. I found myself laughing. At the math. At the fact that I know so very little about little boys. At the realisation that Arddun is going to be a big sister to a little brother. At the sheer and utter joy of knowing I am going to have a son. I have a son.

That was almost 2 weeks ago. A few things since then…

This is our girl. This is Arddun. She’s now three years, one month and two days old. She has a thousand facial expressions, and hundreds of smiles.

She still loves to sing. She lives for the end credits of Walt Disney flicks, because that’s when she gets to belt out the numbers and breaks out the moves. She loves Larry Boy (she calls him Happy Boy), and Bob the Tomato. She’s of the opinion that tomatoes are really yummy, even though she’s not eaten any since she was 7 months old.

She’s starts off Cinderella most days, transits into Elsa some days, and is always Jessie the Cowgirl in between, with her trusty steed, Bulls Eye.

She’s starting to recognise printed words like “The” and “On”. Thanks to the slew of birthdays in June and July, she can definitely recognise the print word “Birthday”, which is synonymous with other delicious words like “cake” and “presents”. She now recognises both capital and small letters of the English alphabet, as well as their sounds. She still loves counting, except she now sounds completely Aussie when reciting numbers 1 to 10 in Mandarin. She also looks completely self-conscious when she does. It’s like looking in the mirror.

She walks into a crowded room, and it takes her – on average – about 45 minutes to warm up. She’s cautious before she’s carefree, looks before she leaps, and in that regard she ceases to be her mother’s daughter and becomes every bit her father.

She absolutely adores her father. They still make pancakes together on Saturday mornings when they can. The bedtime story still belongs to them, and Mummy is largely not allowed. He is Woody to her Jessie, horse (or elephant?) to her cowgirl, prince to her Cinderella. She doesn’t yet understand who God is, but Tony is her rock and her shelter. And because I never had that relationship with my father, it’s now one of my favourite things to watch.

She now feels pain and empathy when others hurt. I took a tumble yesterday and scraped my right knee, and here is my baby girl, grabbing a wet wipe and ever so gently dabbing my bloody wound while crooning, “Oh Mummy. Poor darling… you okay?”

(It had hurt like the dickens, in all honesty. But the moment was too precious to yelp and spoil it all.)

It’s hard to write about your own kid without either coming off flippant or overly mushy. I wish I’m being a lot more articulate, that my prose flows like poetry. But the spirit of this gorgeous human being is woven together by the mundane and the everyday, made altogether exquisite when I realise—with a jolt at the puffing out of candles—how quickly she has grown. It’s all happening now, in strides and sprints. Soon, she will have a sibling. Soon, she will be in school. How many more willing wriggles into my lap during worship for a shared prayer? How many more demands for kisses and cuddles?

The girl is growing up. 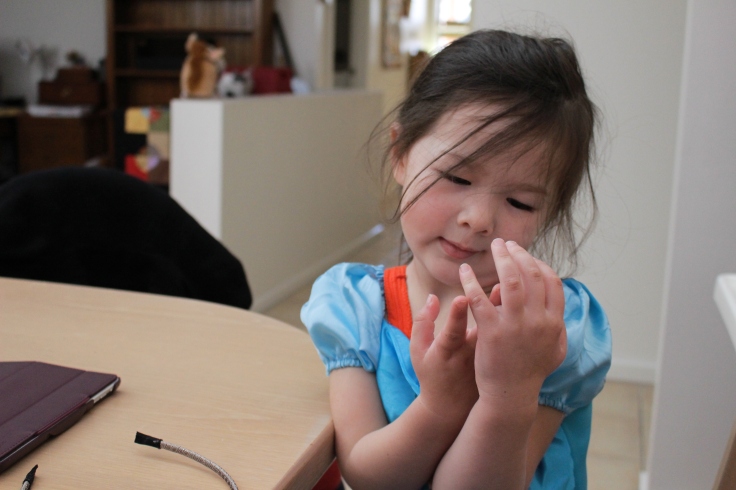 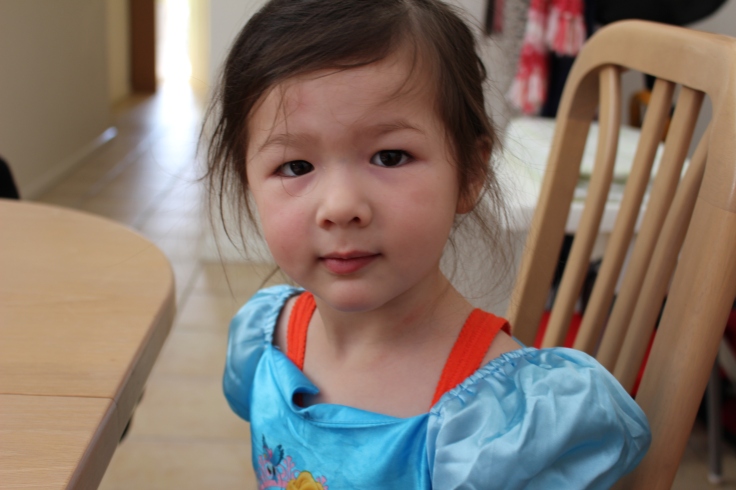 Birthday cake for everyone!

Every year, our mother’s group makes a point to celebrate all of our firstborn’s birthdays in one biggish bash. This year’s was a little later than usual, but no less fun. Just two hours of 3yo heaven – flavoured milkshakes, party games, face-painting, rainbow birthday cake, presents… and of course, ice cream on a winter’s day.

I have two posts jostling to be written today. One is supposed to be a snapshot of Arddun, aged 3 years and xx days. It’s a burst of adoration, a love letter, a scrapbook of scrappy descriptions that can only hope to sketch the lovely creature she was and is and is becoming.

The other is this post. It’s all about the distractions, and the art of decluttering the mind and heart to prepare for goodlier things.

I haven’t been very organised.

Part of it started from the sheer exhaustion one feels in the first trimester of baby-growing, when all you want to do at day’s end is crawl under the doona and fall into a deep sleep. Except I couldn’t bear to indulge myself this way, because I needed to do lots of other things. So we started packing and sorting for the eventual, inevitable house sale. Even before the papers (the stacks of papers!) got signed, Tony and I went and rented ourselves some storage space, and put away about 20-odd boxes before the bitter winter chills set in.

And then it felt too much like I hadn’t had enough Me time, so I started watching The Good Wife from the pilot. And because no one I know in Canberra watches TGW religiously, I wasn’t prepared for how utterly well-written and addictive the series is. Oh my word, it’s addictive.

I’ve finally caught up with the series, so now that there’s nothing left to fill my very late nights, I’ve turned back to decluttering my life. Also, I’ve stumbled upon The Fabulous – a rather pretty Android app that can be summarised as a Life Coach wearing lace. Or something.

I’m realising that my life pendulums from 20,000 boxes of discrete tasks that reek of chlorinated discipline, to wild, unstructured periods of floating and exploring and meh. Except ironically, my unstructured walks in la la land seldom provide inspiration to write or read. There is a mid point, before either extremes take over, where I feel free and disciplined enough to blog regularly.

Welcome once more to my middle.

Now that my energy levels are back to normal, I’ve awakened to a few new truths.

So with that, I bid you a good evening. Sorry this is such a boring post for you, but writing literally helps me think better. Also, I haven’t blogged in ages – so I’m out of practice. So thanks for listening.