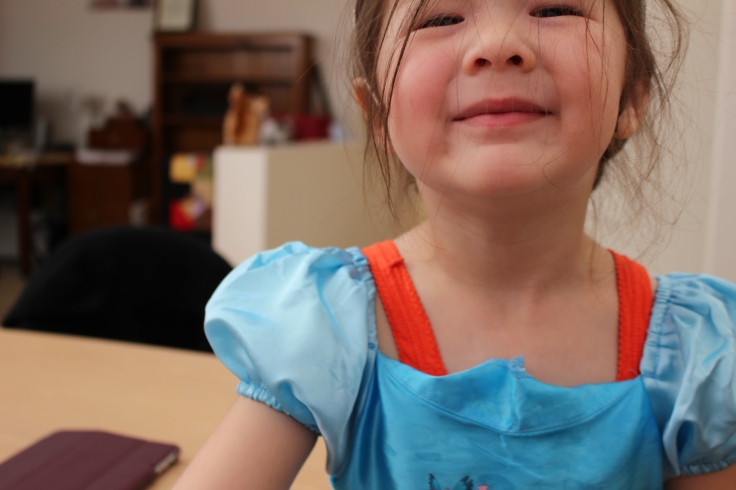 This is our girl. This is Arddun. She’s now three years, one month and two days old. She has a thousand facial expressions, and hundreds of smiles.

She still loves to sing. She lives for the end credits of Walt Disney flicks, because that’s when she gets to belt out the numbers and breaks out the moves. She loves Larry Boy (she calls him Happy Boy), and Bob the Tomato. She’s of the opinion that tomatoes are really yummy, even though she’s not eaten any since she was 7 months old.

She’s starts off Cinderella most days, transits into Elsa some days, and is always Jessie the Cowgirl in between, with her trusty steed, Bulls Eye.

She’s starting to recognise printed words like “The” and “On”. Thanks to the slew of birthdays in June and July, she can definitely recognise the print word “Birthday”, which is synonymous with other delicious words like “cake” and “presents”. She now recognises both capital and small letters of the English alphabet, as well as their sounds. She still loves counting, except she now sounds completely Aussie when reciting numbers 1 to 10 in Mandarin. She also looks completely self-conscious when she does. It’s like looking in the mirror.

She walks into a crowded room, and it takes her – on average – about 45 minutes to warm up. She’s cautious before she’s carefree, looks before she leaps, and in that regard she ceases to be her mother’s daughter and becomes every bit her father.

She absolutely adores her father. They still make pancakes together on Saturday mornings when they can. The bedtime story still belongs to them, and Mummy is largely not allowed. He is Woody to her Jessie, horse (or elephant?) to her cowgirl, prince to her Cinderella. She doesn’t yet understand who God is, but Tony is her rock and her shelter. And because I never had that relationship with my father, it’s now one of my favourite things to watch.

She now feels pain and empathy when others hurt. I took a tumble yesterday and scraped my right knee, and here is my baby girl, grabbing a wet wipe and ever so gently dabbing my bloody wound while crooning, “Oh Mummy. Poor darling… you okay?”

(It had hurt like the dickens, in all honesty. But the moment was too precious to yelp and spoil it all.)

It’s hard to write about your own kid without either coming off flippant or overly mushy. I wish I’m being a lot more articulate, that my prose flows like poetry. But the spirit of this gorgeous human being is woven together by the mundane and the everyday, made altogether exquisite when I realise—with a jolt at the puffing out of candles—how quickly she has grown. It’s all happening now, in strides and sprints. Soon, she will have a sibling. Soon, she will be in school. How many more willing wriggles into my lap during worship for a shared prayer? How many more demands for kisses and cuddles?

The girl is growing up. 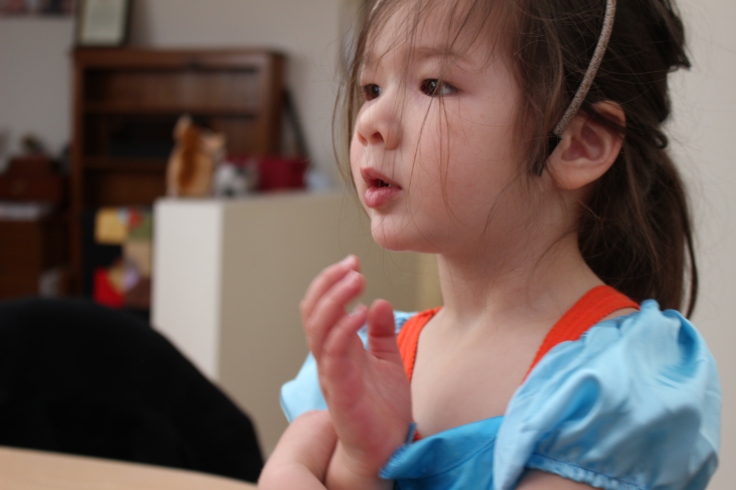