So what’s the boy been up to?

He’s been sloooowly shifting his body clock and sleeping/fighting sleep more predictably. That 7-hour inconsolable crying has been reduced to a 3 to 4-hour stint every evening, which is HEAPS more tolerable. And he’s figured out that his fists are somewhat attached to his body and that he might be able to control them. Most of the time, he jams a fist into his mouth and munches thoughtfully as a loud indication of his growing hunger for actual food.

It’s yet another one of those tiny details that catches me by surprise, because it’s different from what Arddun used to do. I know cerebrally that no two babies are alike, but it’s not until I spot the differences that I realise what individuals these kids are. You mean not all babies treat their fists like raspberry-flavoured Chupa Chups? Huh! Arddun took at least an hour per feed, while Atticus is done in 15 minutes flat. He absolutely loathes the bottle, while you could almost hear the sigh of relief when you handed one to Arddun. 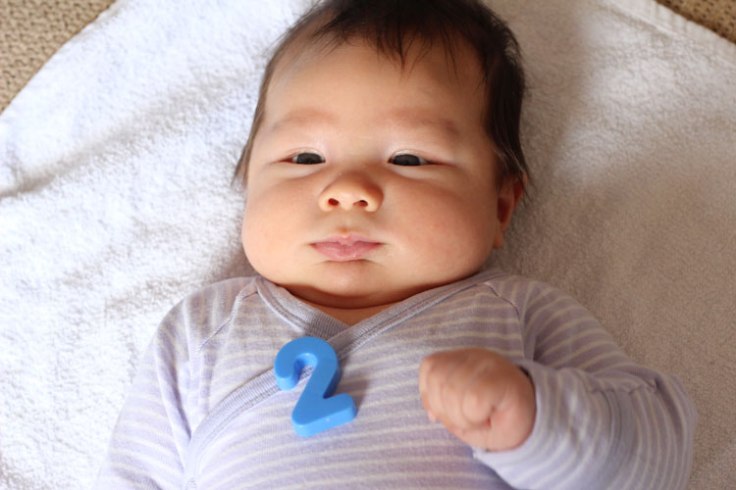 But they both love malling. Just drops them right off to sleep. Nothing like getting wheeled around a shopping mall with central heating/cooling while Mummy shops. Oooohhh yeah.

I’ve already given away most of his 0000 clothes (had to keep a few pieces for sentimental reasons), and even some of his 000s are tight – although I think that’s more about the cutting than anything else. At 7.5 weeks, he weighed 6.575kg – heavier than what Arddun weighed when she was 4 months old.

He’s also had his two-month jabs done. I had brought Tony along for Arddun’s so I could pass her to him before quietly slipping outside the room as the nurse slid the needle into her sweet, skinny thigh. But I did Atticus’s solo, and the needles had more to work with because his thighs are so cute and chubby. Still made him yell till he turned purple, however. That part is never fun. 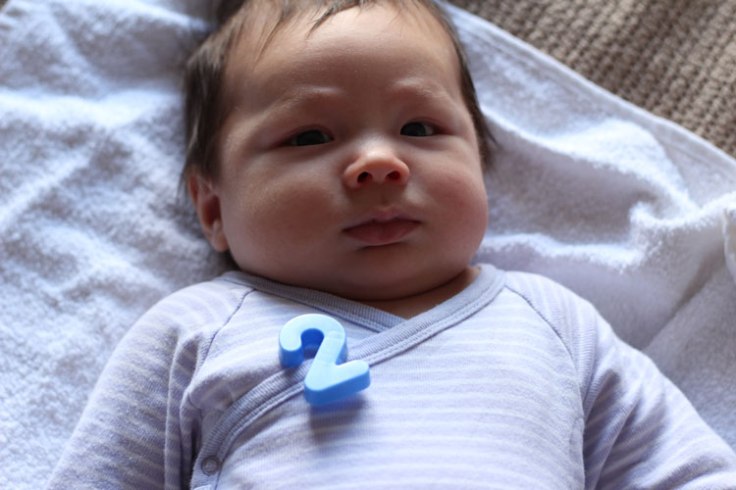 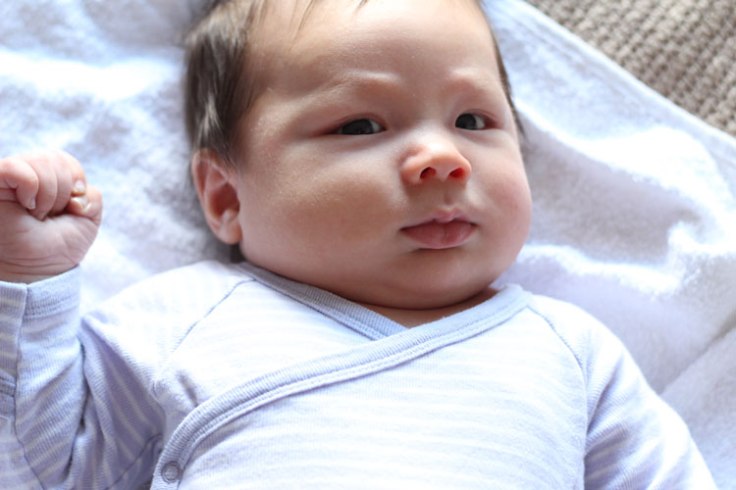 He spent a lot of Month Two getting to know his grandparents – pictures to come in another post.

As for the smiles? The gurgles? The coos? They melt the heart, now that I know he’s properly communicating through them. There was always a stinkin’ suspicion in Month One that his smile might just be an involuntary facial twinge as a fluff made its way out his diaper. This time, you know he’s talking. You know he’s happy.

My 2013 was horrible for the most obvious reason (mother’s death, for the uninitiated) but last year really blew for many of my friends, and for Malaysia’s aviation industry. There were quite a few good-riddance-to-this-rubbish-year posts on my FB news feed, and I’m glad for them, at least, that we have reached 2015.

For us, 2014 was largely a calm year. A winding down from the emotional roller coaster that was 2013. There were a few points for anxiety – the sale of my mother’s home being one, haggling with financial institutions on two continents, being another – but on the grand scheme of things, they proved paltry compared to the addition to our family. Atticus signaled a new chapter to our family life in late November — and a welcome focal point. We rounded off the year largely sleep deprived while being surrounded by family, and feeling older, slightly melancholy and stressed, but not sad. And after the sorrow of 2013, being not sad was a great step forward.

There was a study on “workplace happiness” conducted in Singapore between April and August last year. And the grand reveal was that Singaporeans are Under Happy – that vague, lukewarm, non-committal, soggy middle ground between the state of being Happy and being Unhappy. Under Happy was last year’s Meh, and the punchline for many Singaporeans still secretly seething about being ranked the Least Emotional Country in the World in 2012.

And it got me thinking. Although I had many things I’d been grateful for, and felt largely content with my lot in life, there was still a lot of Meh left in me last year. I’m wondering if it’s a self preservation thing, or the natural trajectory one follows after being shot out of the Emo canon that was 2013. Numbness is comforting. It allows one to function well and to even feel episodes of muted happiness. But although a bland life can be a happy one, happiness isn’t blandness.

I know this is a blog largely about my children and a little about my personal life. But some of the things I keep circling in this blog seems to be Life organisation and finding the Happy – whether it’s about some habit tracking app I find useful, or whether it’s about reflecting on my list of gratitudes every Thursday. I know I probably appear to be overthinking things, or maybe I’ve reached some kind of 40%-life crisis that induces me to contemplate my life and purpose. Perhaps I’m still trying to define myself, since I’ve currently parked my Career Woman persona. Or my cousin’s and mother’s early deaths have shaken me to the very core, and what you see here are the aftershocks.

Or perhaps, if I can indulge in some hubris, my soul resonates with the likes of W.H. Auden, who observed that “between the ages of twenty and forty we are engaged in the process of discovering who we are…”

I don’t know. I just know that I’m searching for… something. Every New Year, I pounce on the chance to reinvent myself to some extent, and this year is no different.

I had started out last year reading Gretchen Rubin’s Happiness Project, and then got sidetracked. I had planned to explore my year like she did with a theme for each month, but that intention got seriously derailed by January, when I decluttered the house (just like in her book) for our anticipated move (which didn’t happen), only to pack her book in the process in one of 70 boxes now sitting in a storage unit four suburbs away.

Anyhoo, I’ve gotten hold of an electronic copy and I’m trying her book out again. This is my Eat Pray Love, except I don’t have to leave my husband and children, and swan off to India to learn how to meditate. I’m still plotting my game plan for 2015 in between innumerous breastfeeds and rocking and shushing and diapering and cleaning and cooking and soothing and playing and including… so wish me luck.

What are your New Year resolutions, by the way? Made any this year, or cannot be bothered?