Growing up, I pretended to be princesses, and I pretended to be villians. My favourite was playing Maleficent, waaaay before Angelina Jolie thought to make that fairy tale character all misunderstood and quasi-raped. And because we couldn’t afford a She-ra Princess of Power sword, I decided to get very good at yo-yos, and become Yo-Ra. In my head, I could wield mine like nanchucks, and lasso the baddies in with effortless ease while still wearing a very short white dress and riding a unicorn. I remembered entering the kitchen dramatically and announcing my augmented superhero identity. “I am Yo-Ra!” I cried, and tried — but failed — to Walk the Dog with my blue 20-cents yo-yo. My mum stopped stir-frying, threw her head back, and about died laughing.

Growing up, I don’t think my mother gave a fig about what were politically correct games for little girls to play. She had her own rules about what constituted ladylike behaviour — standing on the ping pong table in the void deck of our apartment building, for instance, was strictly prohibited. It also warranted some pretty unladylike mummy-bellowing from the 9th floor if I were caught doing so. (That happened twice.)

But loving pink? Wearing golden tiaras and swanning around in my magnificent royal robes (read: blanket trailing on the ground, pegged around my neck)? Pretending to be Cinderella, then her stepmother, then Sleeping Beauty? Imagining myself as mother, teacher, bride? I don’t think gender stereotypes bothered my mother. I don’t think she even thought to “save” me from them. And I certainly don’t think she minded my wanting to be a princess.

So why have I been struggling with princesses when it comes to MY daughter? Why do I feel this strange warmth of satisfaction burst within when Arddun chooses green, red or blue over pink? Why do I feel almost exultant when she asks to watch Cars? Play with trains? Become a Robot? Work in an “office”? And why did I feel this weird guilt, like I’m letting down Team Feminista, when she wants to go full Princess?

Notice I said “did”. 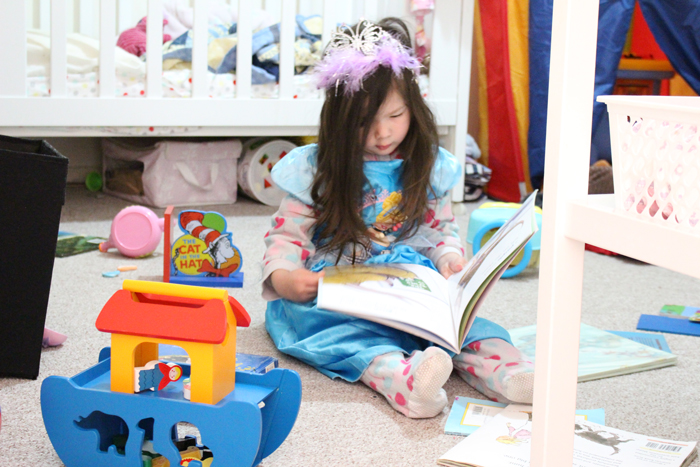 That’s right, I am (still) making my peace. It is a process. Most days are good, some days I really struggle. Because in the countless articles that harp about how Disney manipulates our daughters and how marketing Princess as a brand has become a multi-billion dollar cash cow, I had gotten anxious and guilty. And then I lost sight of real feminism. The pendulum can swing both ways; in my secret denouncement of the Silly Frilly, I had ironically subjugated girlish behaviour. In scorning the commerce of vanity among the young, I had ironically become proud. Worst of all, I had turned “girly-girl” into a dirty phrase, and prescibed and projected rather “masculine” behaviours on my daughter in the hopes that she’d… what, exactly? Not be such a girl? 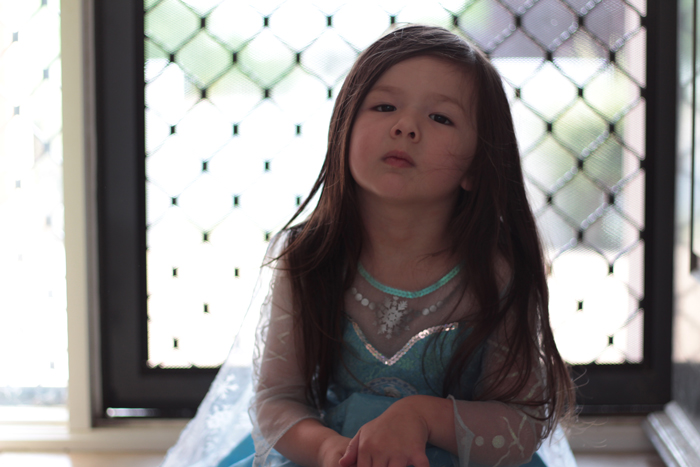 I had also lost sight of the most important things – the focus on the insides. Because beautiful insides are what matter most. I’ve read articles that snort about how some Disney’s Princesses prescribe “meek” behaviours to our daughters. Kindness. Gentleness. Goodness. Servitude. These princesses, they argue, are nothing more than paeans of passivity. These princesses are weak. Simple-minded. Lacking in ambition.

Except it takes courage and character to exhibit kindness, goodness and gentleness. Especially when it concerns loving the enemy — that just takes some kind of special stubbornness woven tight in a loving lion heart. There is nothing humiliating about hands that are willing to serve either. In fact, the only thing I protest along with these pseudo-feminists about the messages Princesses send, is the disservice we do the boys. I think we do our sons no real favours when we emphasise kindness in princesses and inadvertently portray kindness as the sole domain of the woman.

We need more heroics. We therefore need more princesses. And I’m growing one.

One thought on “Embracing royalty”