We’ve been reading Alice in Wonderland to Arddun lately – the unabridged version. She’s watched the Disney version about ten times and has a very short board book version of it. But it wasn’t until she kept asking me to read the Ladybird Classic version – broken into chapters – that I wondered about her appetite for the whole hog.

I ended up downloading Alice for the iPad. More ebook than app, it features the unabridged version of AiWL with some cute interactive bits now and again – falling cupcakes, Alice elongating like a telescope as she gets bigger before shrinking again, comfits bouncing off a Dodo’s back… A childhood classic imagined by Lewis Carroll, illuminated by John Tenniel and then brought to life through the wonders of technology.

I don’t know that Arddun pays attention to the whole thing. There are lots of talky bits and Alice herself tends to go off in tangents that a 4yo can hardly keep up or be bothered with. But by and large, Arddun understands what’s going on. And she really looks forward to doing the book together come bedtime.

So it was little wonder that when Book Week was around the corner and Arddun was to turn up in school as a book character, we did Alice. 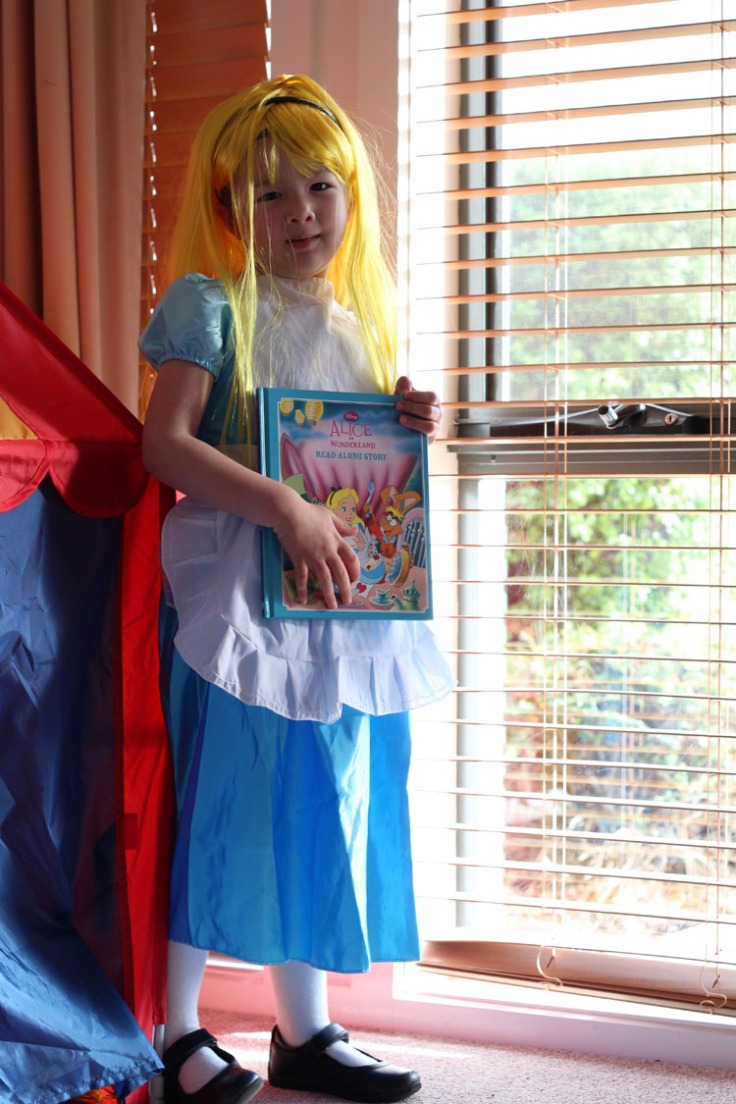 Lots and lots of rules about the dress-up, actually. They could only come as a book character, not a TV one. Please, no princesses or superheroes (read: no last-minute raiding of your child’s dress-up box). They had to bring their book along to school (so I had to run out and buy one because she wasn’t going to traipse into school with my iPad!)

After a quick rummage through existing stash and a dash to Top Bargain for that cheap and cheerful traffic-stopping yellow wig, our Alice was born. But just so there could be no mistaking who her book character was, we needed a storytelling prop.

All in all, a rather fun non-uniform day.