When your daughter gets called a Bitch 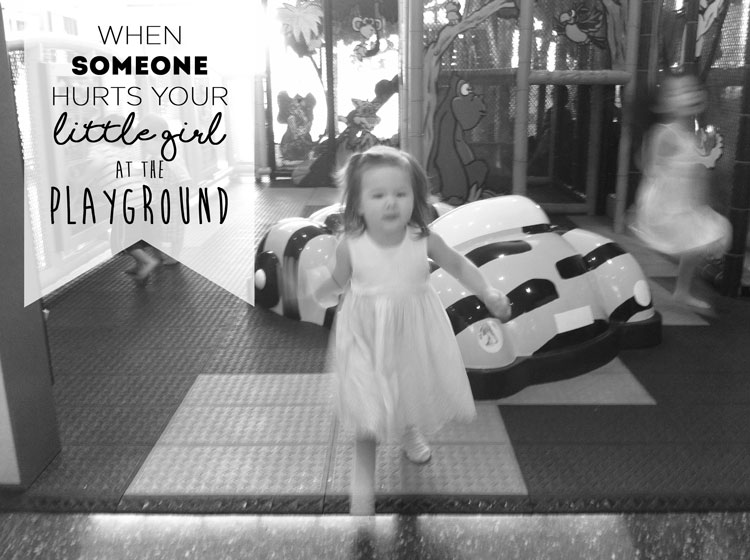 It happened when I least expected it. We were at a small indoor playground at the local mall we frequent. We had just finished lunch. I had groceries to grab. Atticus was due for a nap but he had been hankering for the playground, so there we were.

END_OF_DOCUMENT_TOKEN_TO_BE_REPLACED

Arddun has entered a new phase where she doesn’t much care for little boys her age, so it was all rather charming when she made a new friend at the playground today… who happened to be a little older, a whole lot bigger, and a boy.

That is, until he got mad with Arddun. All because she obeyed my instructions and started putting on her shoes to leave the playground. So cross that she dared to leave his company without his consent, the little brute came over, yelled at Arddun, and then shoved her. Hard.

Now. The bully’s grandma did nothing but give a token squawk of reproof. The mothers around me tut-tutted. And all I could do was hold my daughter while she suddenly realised total and utter rejection for something that wasn’t even her fault. That fat kid (and he really was big) had hurt my daughter in a way she had never been hurt before at a playground. Her little feelings were crushed.

The mama bear in me was aching to growl at that kid so hard, he’d wet his pants for a month. A month. And grow up to be a gentleman for the rest of his life. With hopefully less sugar in his diet.

But when it’s someone else’s kid and it’s some other parent – or grandparent – who doesn’t think all this a big deal, it’s hard to rise to the occasion and show your daughter that you have her back, you really do. It’s hard not to feel like you’ve just let her down on a fundamental level.

So the next best thing, I thought, was perhaps to send her to martial arts classes. So the next boy who touches her inappropriately could get Miss Piggy-ed into the next week.

But then I watched this video, and I’m not sure that’s gonna cut the mustard in the self-defence stakes, either.

Just a quick one before I head off to sleep.

A funny thing happened yesterday in the grocery queue. I was standing there, waiting, for half an hour.

There was only one other person in front of me in the queue. Just one. Which meant I was waiting there, in total, for twenty minutes before I could be served. And then spent another ten agonising minutes watching the cashier match his fruits and veggies to the screen.

My child, meanwhile, was starting to get seriously hungry. I know this because she was desperate enough to remember her signing, so she was shoving fingers in her mouth (“hungry”) and rubbing her tummy (“please”), while imploring me with sweet, serious eyes to hurry the dickens up.

The funny bit is that I didn’t blow up at the cashier. Or even shoot him a dirty look. Even though my child was starting to go hungry, and my husband was getting grouchy about it. Even though said cashier probably deserved a mumbling about gross incompetence, mind you. No – this checkout bunny was a slight, pimply young man who handled each grocery item with all the unfamiliarity and hesitation of a manicurist birthing a calf. And I was standing in line with almost zen-like patience, waiting for him to get through and find his way.

Why? Because for some bizarre reason yesterday, I kept telling myself that he was somebody’s child. And if Arddun were one day a checkout monkey because of some character-building excursion Tony and I decide she needed, I’d like her customers not to hurl abuse. Or shoot her dirty looks. Or even hurt her feelings by packing up all their groceries and moving to a faster queue.

There’s a parable in the book of Matthew where Jesus explains how proxy kindness works. I am paraphrasing terribly. But essentially, whatever good you do to your fellow man, it’s as good as if you’d done the deed for Christ himself. And I know this parable very well. Yet for some strange reason, it’s never quite resonated with me until I had Arddun.

Quite simply put, I’d never thought too deeply about how God feels about us being His children. I’ve understood my role as His child… but I’d never put myself in His shoes and thought of how God regards those who treat his children kindly.

Juxtapose this with another incident that happened in the library fairly recently. The library, as I’m now made to understand, is where toddlers and children go to climb furniture and blow off some steam indoors on a cold winter’s day. Any reading of books is incidental and entirely fortuitous. Arddun loves the library. Mostly because she loves being around other children, and is now getting to a stage where she is fascinated by older girls.

Well one day, Tony took Arddun to the library. And he returned that afternoon to tell me how a group of four-year-old girls were starting to gang up on Arddun. At one point, they were pretending to be sharks and started “eating” Arddun. And Tony was sitting in the corner, watching the proceedings coolly, on the ready to step in if Arddun got hurt. Thankfully, she was far too young to understand that she was getting picked on rather than included, and so she spent most of it looking at them quizzically. No hurt feelings on her part. But I can tell you, I got pretty annoyed about the principle of the thing.

Then one afternoon recently, Arddun and I were in the library and it happened.

There’s a touchscreen television in the corner with some kids activity on, and she had just figured out that prodding the screen got certain things happening. There was a small queue of kids starting to form, and it was Arddun’s turn. And of course she didn’t know what she was doing – she was just happy to be there, and the more kids there were joining her in the pointing and the prodding, the merrier.

Then a four-year-old girl came over, placed her hand on Arddun’s head, and tried to shove her away from the screen. Hard.

But just as she did so, the perpetrator happened to glance over and that’s when she caught my face.

Which was precisely when she converted her hand-shoving motion to a more sheepish pat-pat of Arddun’s head. And then she climbed down quicksmart and ran to look for her parents, which was the first smart thing she did that morning.

So, lesson about myself is as follows: