The Whirlwind of Boy

As much as I’ve been reluctant to stereotype my children’s behaviour based on their gender, I am beginning to understand what mothers of sons mean when they say, “He is such a BOY.”

Because Atticus is such a BOY.

END_OF_DOCUMENT_TOKEN_TO_BE_REPLACED

Lately, I’ve been more self-conscious of how different my interactions with both children are; how I automatically give grace and room for mistakes with Atticus, and yet how much tougher I seem to be on Arddun because she is older “and therefore should know better”. And yes sometimes, she ought to know better.

END_OF_DOCUMENT_TOKEN_TO_BE_REPLACED

About Death, Departing, and Disco

Today has been a strange sort of day.

I’ll start with the light and fluffy – an earworm. I woke up this morning with Take That’s version of Could It Be Magic in my head. Lord knows what I had been dreaming. It was so loud, so catchy, and so stubborn, I ended up downloading it. And then hummed it for the rest of the day.

(Never watched this MTV till now. Talk about throwback to the ’90s!)

I got the call from the agent after pulling into the garage, and walked into the backdoor for the first time as a tenant. We are no longer this home’s owners, not really. We’ve been thrilled by how quickly the house sold, but the excitement and relief is also tinged with sadness. God willing, we leave this place in November as scheduled so we have three full months to work up to that goodbye. I will miss this place.

The Cuz has been dead for five years today. It feels like it should be such a milestone, so as usual I’m conflicted to the point where emotions are muted. The picture of 21-year-old us still sits on our sideboard. It faces the kitchen, in the heart of our home. When I’m feeding the kids, or preparing lunches and dinners, I see our faces. I still think about her often.

But I no longer think of her daily.

Such a brutal confession to myself and to you, reader. No one likes to admit the awful realities of beginning to not remember someone they love. I will never forget her, but I don’t always remember her. I still love her. I still miss her. I still want to tell her things. But my life is so completely different now to what it was when she parted this earth, so I don’t always imagine her understanding. I can’t always conjure a typical response.

It strikes me that the version I have and keep of her is 5 years old, and it slightly terrifies me that I’m growing older and therefore apart from her. Will I still be able to half-talk to her when I’m 40, and she’s 30? When I’m 50? When I’m 60? When will it start to feel like I’m a crone talking to a young woman, instead of girl talking to her first and closest friend? She stays the same. I have not. I am always changing, no matter how stubborn I claim to be. God sees to that.

Today, I thought about her gorgeous, shiny, white teeth. That brilliant smile. She had one canine that was turned 90 degrees, but her teeth were still straight and her smile, still dazzling. She had such razor-sharp wit, but enough girly goofiness to laugh at my jokes. She read, and read, and read. Heaven has a library for her.

I still have your knee-high boots. I haven’t worn them. I probably should one of these years, but I wouldn’t know what to match them with and they’re camel, and probably won’t match my skin tone (made all the more translucent by Canberra winters). You always had such fabulous skin.

I have a son, Celina. I have two children now. I cannot hear your reply.

I still remember the daydream we had for years and years, the one where we’d share a house and prepare to go on double-dates together. Perhaps we could share a mansion in heaven.

Say hello to my mum for me.

Between the passing of Lee Kuan Yew on Monday and the anniversary of my mother’s death today, I’ve spent quite a bit of time thinking about who my heroes are.

Lee Kuan Yew was the man who made a great nation rise like a phoenix from the ashes of separation from Malaysia, and the kthxbai desertion from the Brits. My mother was the woman who rose far, far above her circumstances. And made it her life’s work to build us a deeply loving home.

And while I’m thankful to LKY, I’m indebted to my mother most of all. Because what good are four walls and a roof over one’s head, if there is no love therein?

Like the way her eyes crinkled when she smiled. And how perfect her teeth were. She never wore braces — wouldn’t have been able to afford them even if she had needed them, which she didn’t. I remember visiting a dentist at the National University Hospital and how the dean of the University’s dental faculty – also a brother in Christ – was so impressed by the fact that my mother, about my current age then, didn’t have any fillings in her teeth. He ended up getting photos done of her teeth to frame up, or use as teaching aids. I can’t quite remember. But she had perfect teeth, and a beautiful smile that she gave away generously.

I loved that smile. I yearned for her approval. No matter how hard I rebelled on and off, I know how much I always craved her approval. Even despite my best efforts.

My mother was still in her twenties when she faced the reality of living the rest of her life as a young, divorced mother. Singapore still isn’t a welfare state, and back then there was definitely nothing in place like Centrelink for young, struggling mothers. So it took a special kind of courage to decide to go it alone. I remember going to the old church building during the weekdays and playing with Pac Man on an Apple computer with the green screen while I waited dutifully. We were there, because my mother was seeking counsel. It was a decision that took years in the making, even while my parents stayed separate. Ultimately, I think she made the decision because it was obvious my father wasn’t serious about his vows, and my safety and security were paramount to her.

It’s why I feel particularly protective of her whenever I hear a sermon or a bible study about divorce. Sometimes, she would wonder aloud if she had made the righteous decision. It was the right decision, perhaps… but was it righteous in the sight of God? That tormented her sometimes. I wish it didn’t. My father walked away from his responsibilities, and then brought trouble back — repeatedly. She protected us. To this day, it makes me furious when I hear anything that could have made her feel guilty about her divorce because it was one of the most heroic actions she took for us.

I know she would have loved to meet Atticus. She would have made him laugh so hard, just as she did with Arddun that age. She just had that way with Arddun. I look at Atticus as I soak in his babyness, and I miss my mother because she can’t. Not in the flesh anyway.

I was just saying to Tony last night how I still can’t believe that my mother was cremated. There is something just so final about burning a body – even more so than burying it, perhaps. And yet, I remember holding her bones and letting them go in the sea. It remains the most painful thing I’ve ever had to do. The heart physically squeezing as it breaks. The finality of it.

I still shop and mentally pick out things she would’ve liked. Bought a bag yesterday that she would have adored, and I would have probably given to her as a present. It was pure leather and had blue in it, of course it did. My children, your Grandma Singapore was almost obsessed with the colour blue. It’s why when she finally renovated her kitchen, it was like walking into Sea World. Blue upon blue. We called it the fishtank and laughed gently at her. But she loved her little kitchen. And then she stuck sea animals on the blue glass cabinet, because she loved us for laughing.

Blue never used to be my favourite colour. But I love it now, because when I carry a bit of blue, I take with me a bit of your grandmother.

It’s been two years. And I still wish fervently that I’d round a corner, only to find you standing there. Arms outstretched for a hug. Grinning.

I’m finding it more challenging to photograph our family’s shenanigans lately. Still to master the art of farfing DSLR camera settings with one free hand only. Yes, Atticus’s feeds are inversely proportionate to my success rate for capturing the moment.

Nevertheless, I tried. With any and every camera within grabbing/lurching distance.

Since then, we’ve cooked in three kitchens 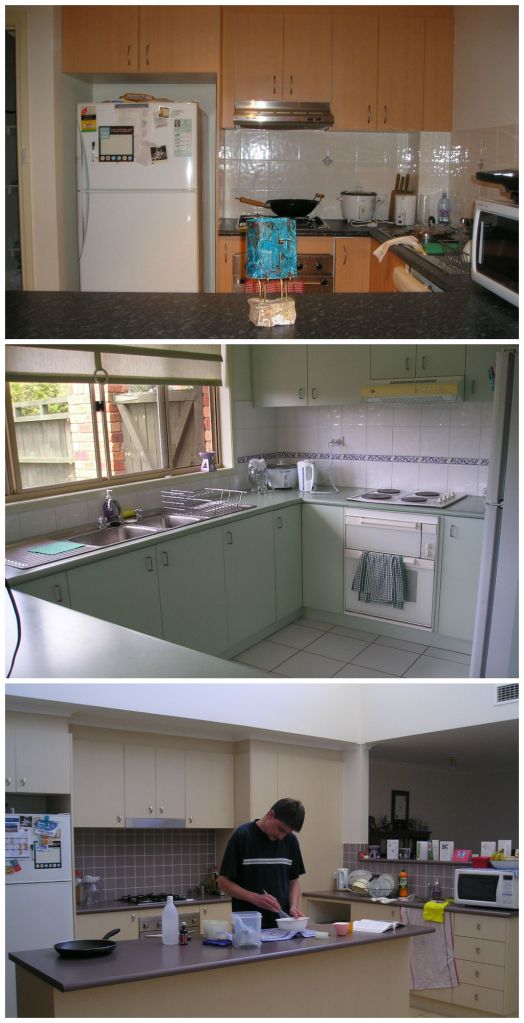 Travelled to Singapore so many times we’ve lost count 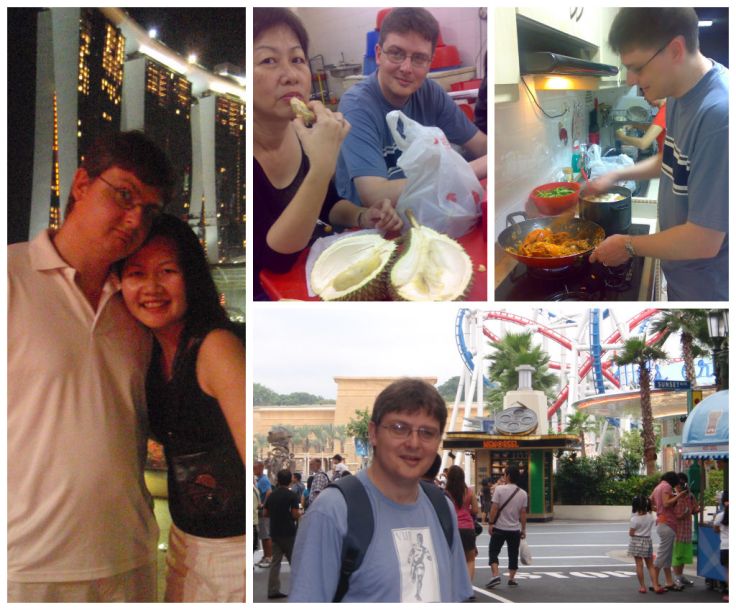 We didn’t get much chance to make it a big celebration this anniversary. Visits from family overseas and interstate was one reason. And then there was the rather tiny matter of birthing a whole other human being and being severely sleep-deprived as a result.

And yes, part of me wants to knuckle down and get real Deep and Meaningful about my marriage at this time of year. Part of me wants the big fanfare to mark this significant milestone. Ten years! It should mean something. I want to tell him how he’s changed me. I want to tell him how I never want some things about him to ever change. I want to tell you that there were rough bits and boring bits and tough bits, but they were few and far, faaar between the absolute comfort and joy and love and certainty and assurance I get to enjoy every day. Every. Day.

It’s been a real privilege being a wife and from that, a mother. Ten years! Thank you, God.

Just some shots of our newly expanded family nucleus. Letting my n00b photography skills be the outlet for all my proud, mushy mamma hormones running amok. Sorry for high sappiness levels. I am a wife and mother in love. 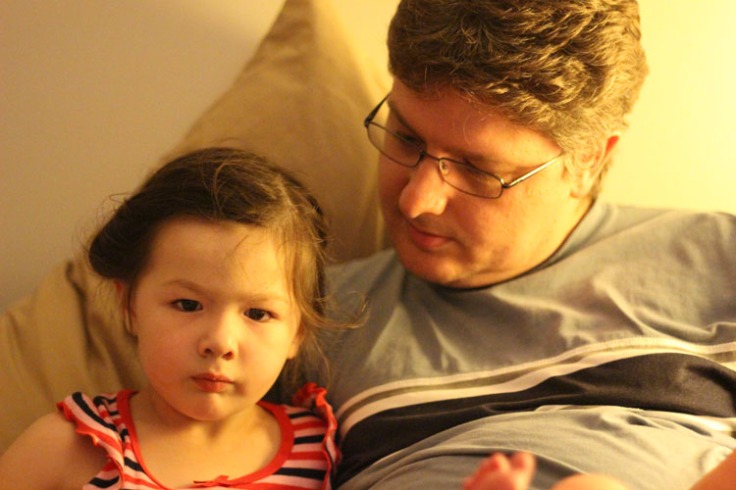